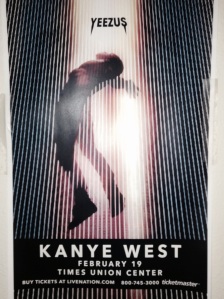 Last month WCDB gave away 5 pairs of tickets to see the always controversial Kanye West on his Albany stop of the Yeezus Tour.

Those who were at the Times Union Center on February 19th 2014 were able to witness something that was was less of a hip hop concert and more of a muscial happening.

Kanye presented his “Yeezus” album in an epic theatrical poduction featuring a set of a large snow-capped mountain which he ascended to the top of to perfom his song “Power” and then split in two allowing a procession of Jesus to led Kanye into “Jesus Walks.” The set also a featured a glacier in the middle of the crowded audience which rose up and down for emphasis. There was even snow fall for his intimate performance of “Coldest Winter” and a laser light show for his hit “Stronger.”

It was by far one of the most extensive and creative musical expriences I have ever been to. In the close to 2 hour extravaganza, Kanye preformed most his latest, critically acclaimed album “Yeezus.” He also incorporated every notable song he has ever released including a few album cuts from his debut “The College Dropout”, which is celebrating its 10 year anniversary.

In my opinion, Kanye west is one of the greatest artists of all time. Ignoring a few awkward rap lines, West understands synesthesia better than anyone else. His music, art, cloths and stage show reflect a mood and feeling that is exactly true to how he feels. The fact that he claims to be a  humble rap god is some of why he is revolted, but is the same trait that makes him so great.

Congrats to all our ticket winners and keep it locked to WDCB Albany for more ticket giveaways.

We missed a few days there while our radio station took a retreat to Dippikill, but its nice to be able to resume this project on an important date. Lou Reed’s passing last year left a strong impact on the music scene as many prolific artists from various genres chose to show their respect to the former lead singer of The Velvet Underground. Today would have been Reed’s 72nd birthday, and he’s one of those figures that I enjoy paying tribute to as often as I can, so with that in mind today’s Song-A-Day is going to go to the track “Here She Comes Now” off of White Light/White Heat.

Happy 86th Birthday to Fats Domino! Music has changed a lot since the times when this man’s music was constantly on the charts, but the quality of his compositions remains as apparent today as it was then. Congratulations for staying strong, out Song-A-Day goes to you with your hit “I’m Walkin”.

George Harrison was born on February 25 back in 1943, and is perhaps the best example in music history of a musician gaining their voice in the creative process mid-way through their career. Today’s Song-A-Day goes to his contribution to Sgt. Peppers in “Within You, Without You”.

One of the best upcoming rappers out there still can’t drink legally in the US, happy 20th birthday to Earl Sweatshirt from Odd Future, our Song-A-Day goes to him with “Blade”.

Today’s Song-A-Day gives you some current music, this one is off of Angel Olson’s new album titled Burn Your Fire For No Witness with the song “Enemy”.

Broken Bells has been a success story so far, something which shouldn’t have surprised reviewers like myself because of the talent of James Mercer as a lyricist and Danger Mouse’s history of successful collaborations. Their self-titled debut back in 2010 was a refreshing medium for Mercer to be displayed within and one of the more enjoyable releases of that year, but After the Disco feels like it falls short of the achievements of it’s predecessor. There’s something to be said about the novelty of a sound, it’s what made tracks like “The High Road” and “The Mall and Misery” become so easily enjoyable and immediate, but the duo doesn’t seem to have enough variation in their repertoire to continue releasing albums which are unique from each other, and that’s an issue. Everything on After the Disco sounds a bit too familiar for my liking, and because of that the interest diverts away from the actual product and instead focuses upon how Mercer and Danger Mouse influence each other from track to track from an experimental perspective.

All of this being said, a lot of the positive qualities of the band have survived to this second album and it’s no surprise that it has already found commercial success. The pop qualities are still very present and Mercer is still a good frontman for the project, but the lasting impression from this one is that the group might have benefitted from taking an approach similar to what The Postal Service did when they released Give Up and then returned to other projects.

Top Tracks: “After the Disco”, “Leave It Alone”

Guided By Voices was in the news for some not so great reasons recently, as their ‘classic’ lineup ran into some tension once their drummer Kevin Fennel attempted to sell his drum-set from the Bee Thousand years in an auction to the chagrin of Robert Pollard. It caused a pretty ugly feud between the two which led to Fennel’s publicized dismissal from the band, but the entire altercation has once again proven that the music of Guided By Voices will stop for no man. Motivational Jumpsuit is the first of two albums which are scheduled for release in 2014 by the band, and it captures Guided By Voices’ energetic, interesting, and diverse musical style well. The single is the first track in the album titled “Littlest League Possible” and it leaves an impression for it’s immediacy before seamlessly transitioning into “Until Next Time” which offhand references Mario Andretti in the opening lines. Pollard knows what he’s doing when he creates an album by this point in his career, and Motivational Jumpsuit strikes me as an album which was created with more attention to the details then it’s predecessors in this new revival-esque era for the band, a good effort by them.

Top Tracks: “Until Next Time”, “Some Things Are Big and Some Are Small”

A more difficult listen than the other albums, Burn Your Fire For No Witness is a soft, intimate album about the longing for social independence after the break up. She does this in a similar style to what Sharon Van Etten did on Tramp in 2012 where social anxiety was discussed by stripping down the music and making the vocals sound narrative in nature. The honesty in the lyrics is the best quality of a well-produced album, creating an interesting listen which asks the listener to remain patient with the slower portions outside of tracks like “Forgiven/Forgotten” and “Hi-Five”. An area for improvement for future releases would be to find a way to reach a song’s peak more easily and consistently, something which can be achieved through improved lyricism or well-planned song form. Qualities like that are rarely present at the beginning of an artist’s career though, and we may see that progression become a natural occurrence for Angel Olson, for now she is a good artist with the potential to be very good.

Fifteen years ago, on February 22 1999, The Roots released their album titled Things Fall Apart featuring some of the best music that the group has released. Happy Anniversary to that album, and we celebrate by donning our Song-A-Day for February 22 “Ain’t Sayin’ Nothin’ New”.

Today’s Song-A-Day goes to one of the better Ra Ra Riot songs out there in “Winter ’05”, a song about longing for your partner so that winter wouldn’t pass so slow.

We celebrated Give Up on the 19th, but that date is also the anniversary of one of my lesser-known favorite albums in All Hail West Texas by The Mountain Goats. This one captured Darnielle at one of his song writing peaks, and not much else in his discography compares to the one-two punch of “Best Ever Death Metal Band in Danton” and today’s Song-A-Day: “Fall of the Star Running Back”.

Junior year
You blew your knee out
At an out-of-town game
Nowhere to go but
Down, down, down
Nothing but the ground
for you to fall to

By July
You’d made a whole bunch of brand new friends
People you used to look down on
And you’d figured out
A way to make real money
Giving Ns to your friends
And it felt stupendous:
Chrome spokes on your Japanese bike
But selling acid was a bad idea
And selling it to a cop was a worse one
And new laws said that
17-year-olds could do federal time
You were the first one,
so I sing this song for you
William Standaforth Donahue
Your grandfather rode the boat
Over from Ireland, but
You made a bad decision or two.