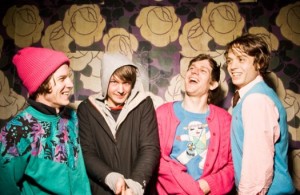 Regardless of where music is being played, there’s usually a good amount of people prepared to suggest which song should be played next. This can be a fun communal process where everyone gets to learn a little bit about the other music tastes in the room and possibly get introduced to great new artists, but in my experience that’s a pretty rare happening unfortunately. That’s not to say that everybody has bad tastes in music, because most people I end up hanging out with have awesome music tastes, but whenever somebody takes over the next track it’s usually because a song’s been stuck in there head and they need the relief of it being played. I’ve been there too, this weekend I played STRFKR’s “Pop Song” at a friend’s house, not because it fit in with the set list or mood of the party but just because I wanted to change the music to a sound that I thought was more fitting for the environment.

I stand by the fact that it was a good song choice for people hanging out to listen to, but the fact of the matter is that it’s not a fair mentality to carry to attempt to change the sound of the room to whatever you want to hear. For one it’s a selfish act since not everybody there is going to like what you will, and it leads to the problem of everybody trying to get priority on the next track choice so that they can change the sound of the room yet again. What this leads to is a playlist full of awkwardly arranged songs that don’t really go together but were selected for individualized purposes, or a sound that’s disjointed and therefore not pleasant.

here it is), but the problem actually can carry over into radio shows too. Sometimes we’ll get awesome requests of what to play, for example: I was playing a ton of 90’s rock on my show one day and as I was playing an early Modest Mouse track I got a request to play Built To Spill. Two artists that have very comparable sounds and can segue into each other pretty damn easily, and a song request to help me because I’m still not nearly as familiar with Built to Spill as I should be (which sucks because I know that I am going to love them some day). If there’s a request which lets me know a track that fits into my set really well, especially for an artist which I don’t play to often, then that is extremely appreciated and one of my favorite parts about making radio shows. That’s not usually the case though, as most song requests I’ve seen are closer to the previous mindset where somebody just had a song stuck in their head and wanted that song to get played on the radio. It doesn’t matter what was playing, and that mindset drives me nuts as someone who always pre-plans what I’m going to play on the radio.

If I still do decide to play the song then it becomes a challenge of how to actually work my way back to what I was doing before, usually solved by an awkwardly placed PSA (thanks FCC) and a quick re-introduction to what was going on before. I think most people actually feel the same way about this, but the mindset is a bit funny because there’s a mentality out there that DJs love receiving song requests. That’s not really true though, I only like them if they fit.